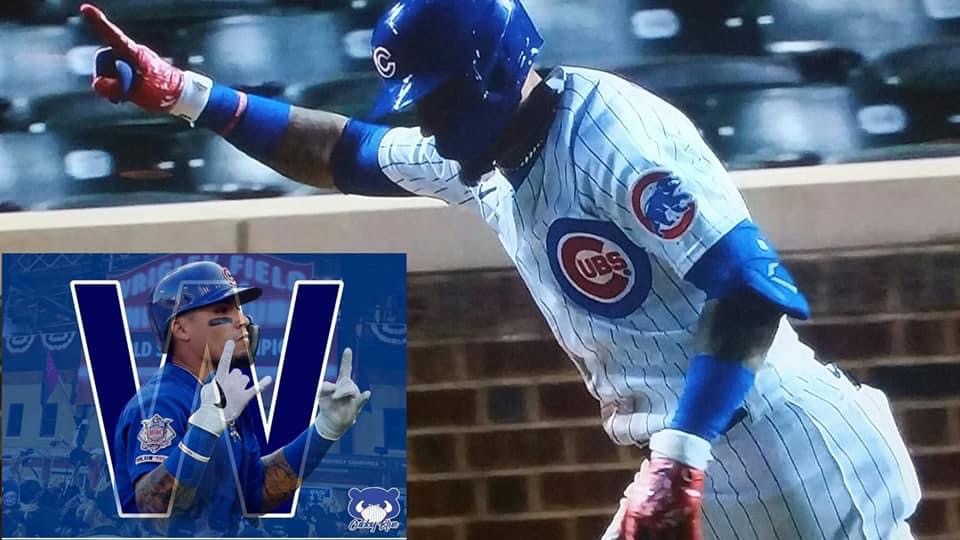 In the bottom of the 5th with 2 out, a drone was spotted hovering over Wrigley. The umps pulled the players off the field. During commercial break Kasper said it landed in LF & then took off. Rough start for Big Jon. He walked Lindor to start the game & advanced to 2B on a sac bunt by Deshields. Ramirez singled, Lindor to 3B. Santana popped up to Baez for the second out, but Lester throws a wild pitch scoring Lindor.

Lester settled down after that. He gave up a leadoff double in the 2nd, but got the next 3 easily. A clean 3rd, gave up a single in the 4th but erased on a DP. The Tribe tie the game on a leadoff HR by Mercado in the 5th. Lester was done after the 5th, little surprised. Especially with a low pitch count, 62 pitches. Tribe was hitting him hard & with the off day tomorrow, save Big Jon’s arm for the playoffs. 5IP, 2ER, 4H, 1K, 1BB, 1HR.

Lester’s post game comments were that he tried too hard to repeat his last outing. Had a few things on his mind, such as his contract is up after the season & was this his last game at Wrigley?

The bullpen put up zero’s! Tepera, Wick, Kimbrel, Jeffress, & Adam all pitched a scoreless inning each. Jeffress was the only one who gave up a hit. 7 combined K’s! Not much Cubs offense, but just enough to win! That doesn’t mean they didn’t have scoring chances, though! Cubs hit into 3 DP’s. Cubs tie the game at 1 in the 2nd. Schwarbs walked, Baez singled but is thrown out at 2B trying to stretch a single into a double. JHey drives in Schwarbs with a single to CF. Cubs take the lead in the 4th. Willie hit by pitch, Schwarbs K, Baez hits into a force out, Willie out at 2B but on the throw to 1B it was wide & Baez inadvertently kicked the ball as he passed 1B. He advanced to 2B & kept going to 3B. Jason Heyward walked and Cameron Maybin singled deep into the hole at SS. Lindor struggled to get the ball out of his glove & JHey beat the throw at 2B scoring Javy Baez. Huge scoring chance blown in the 7th. Maybin singled, Nico doubled, Maybin at 3B- NO OUTS!

Pitching change, Karinchak replaced Civale. He got Happ & KB swingin’, Riz got the free pass, but Willie grounds out to Lindor to end the huge threat. The blood pressure was rising in the 10th! Happ started the inning at 2B & advanced to 3B when KB singled. Riz got the free pass again to load the bases, NO OUTS! Willie & Schwarbs goes down swingin’! Baez down quickly, 0-2 count. Third pitch was a curveball & Baez had to reach for it but made contact as he lined the ball to LF for the WIN!!! WHEW!!!

Off day tomorrow and the Minnesota Twins are in for the 3 game home finale series. The Professor vs The Old Man & Ex-Cub, Rich Hill in game 1. Kyle Hendricks had a no decision in his last outing in the Cubs 4-2 win over the Milwaukee Brewers. He has a 1.66 ERA for Sept.Game Time: 7:15pm CT.