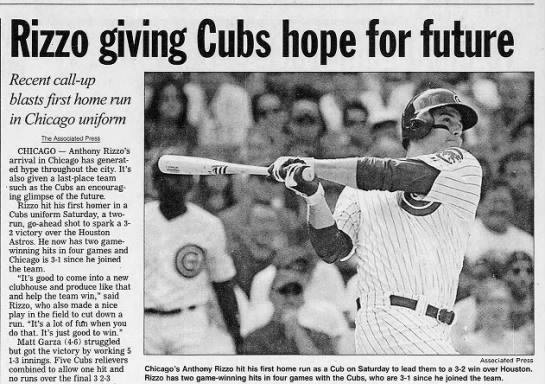 Anthony Rizzo hit his first home run as a Chicago Cub on this day in 2012.
It was a long and winding road for Rizzo to end up with the Cubs. He was drafted by the Red Sox in 2007, and his climb up the ladder was interrupted by a bout with cancer.
Just as he appeared to be on the verge of making the Red Sox, he was traded to the Padres in a deal that sent Adrian Gonzalez to the Red Sox.
Rizzo spent 1 year with the Padres, they brought him up for 6 weeks in the middle of the season, and then as part of the expanded rosters in September. Like most young players, he struggled when he got to the majors.
In the fall of 2011, the stars fell into alignment. The Cubs hired Theo Epstein from the Red Sox, who had drafted Rizzo, and the Padres traded for Yonder Alonso, who they viewed as their first baseman of the future, thus making Rizzo available.
At that time, the player who was getting all the attention was Bryan LaHair, who had just hit 38 home runs in Iowa, and knocked in over 100 runs, and he was seen by many as the Cubs 1st baseman of the future.
Spring of 2012, Rizzo gets sent to Iowa, LaHair is the Cubs starting 1st baseman, and gets off to a hot start, and ends up being the Cubs representative in the All Star Game.
By the end of the year, Rizzo is the Cubs 1st baseman and LaHair is on his way to Japan. 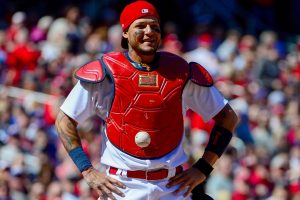