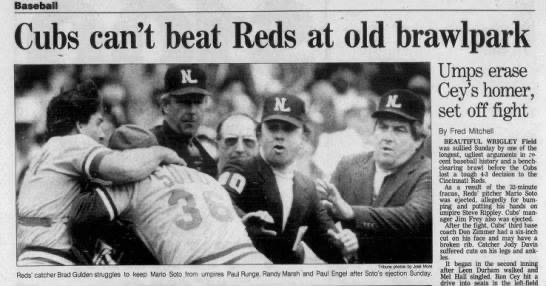 May 27th 1984, The Brawl at the Friendly Confines. Soto, the Cincinnati’s Reds starting pitcher, is ejected from the game when he shoves Steve Rippley, the third base umpire who called the Cubs Ron Cey’s foul ball down the left-field line a home run. Although the decision will be reversed, the Cincinnati Reds right-hander will also attack Chicago Cubs coach Don Zimmer, prompting National League president Chub Feeney to suspend the fiery fireballer for five games, the first of the two suspensions he will be given this season.